Wanderlust and Suburbia. Or Somewhere in Between. 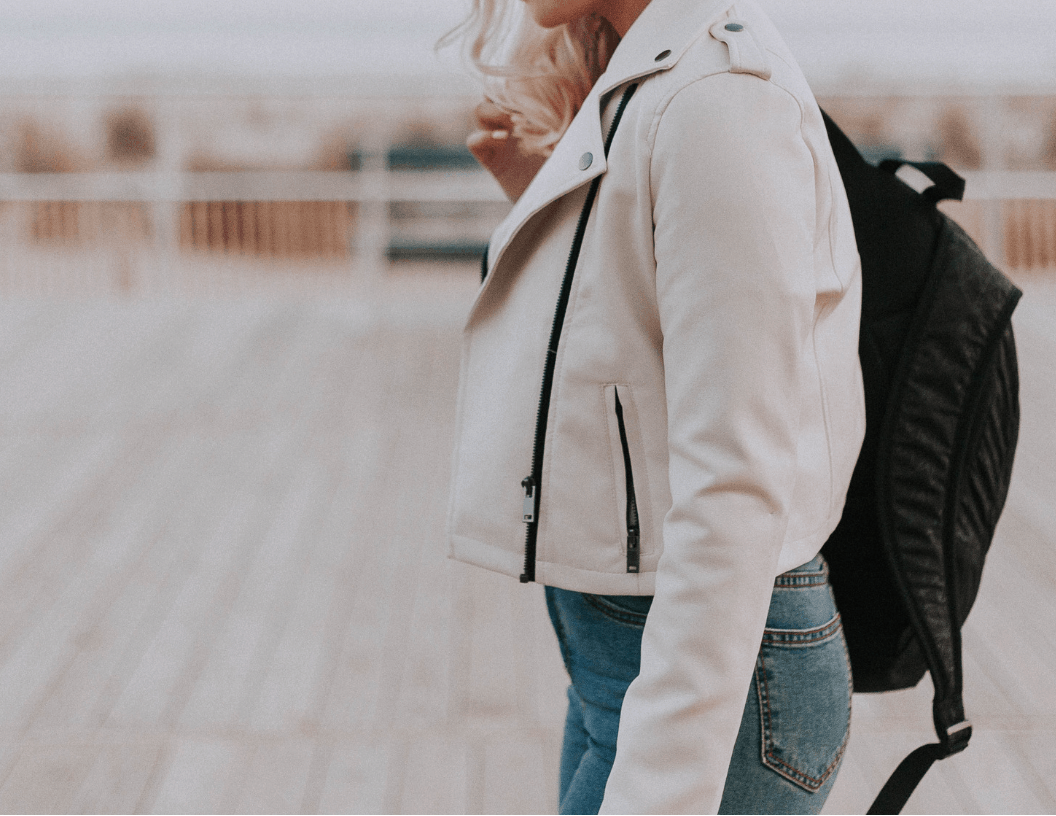 Almost a decade ago, not long after my husband Tom and I got married, I couldn’t help but continuously think about how surprised I was that this was how my life had turned out. Don’t get me wrong, I loved my husband and our kids. We were so happy. I had just never pictured myself in the neighborhood with the white picket fences and perfectly manicured lawns. I had always thought I would live a wanderlust life of adventure. I would climb non-metaphorical mountains and see all the sites of the world. Still, I convinced myself that suburbia was what I needed. Suburbia was right for me. Tom was the right choice. Not some wild, untamed wanderer. Or have I been wrong this whole time?

There is no denying that my sense of adventure stems from my dad. I saw him every other weekend and each time we visited, it was always an adventure. Even if we weren’t doing much of anything.

We made snow igloos in the back yard, brought in blankets and candles and huddled in there like real-life Eskimos.

Summer months, we’d climb the tree next to my grandparent’s house so we could look for UFOs on top of the roof. We almost always saw one. (wink, wink.)

My dad would put an old tape called “Sleepy Hollow” into the cassette player in his old beat up Hyundai and we would drive down dark, wooded roads late at night listening to the creepy music. “OH! Did you see that!?!” He would say and I would quickly suction my face to the window looking for whatever beast was lurking outside.

We went camping. All the time. My dad battled skunks, we survived canoe tippings in the middle of a wild river and we huddled for shelter during the middle of a hail storm.

Every other weekend was an adventure.

The darker side of adventure

It’s true, every other weekend was an adventure with my dad. Those few stories aren’t even the half of it.

We played in waterfalls, set off fireworks, took road trips, and stayed in hotels just for fun. But, my dad also had a struggle that I wasn’t aware of.

At the drop of a hat, his personality would change. He would be angry and mean. Sometimes he would “sleep walk.” Maybe he actually did…or maybe that’s just what they told me when I’d find him stumbling around drunk in the middle of the night.

Either way, I was never sure which side of my dad I would get.

“Your dad loves you, he just…he has his own problems.”My mom would always tell me. Bless her heart. How hard must it have been not to let out every single angry thought she had inside.

Even when I was 12 and my dad spent an entire summer in a coma after the harsh effects alcohol had taken on him. I’m still not sure what happened. No one told me he might die. The word “alcohol” was never mentioned.

After that hospital stay we had a few more great years with our dad, my younger brother and I, but ultimately the alcohol won.

When my dad died, I was secretly married to a man in the Marine Corps. Yeah, I said secretly. …It’s a whole thing.

After he passed, I was living in Arizona, thousands of miles from family and friends, with no job and only my dog as most days. During these quiet, lonely days, I had a lot of time to evaluate my life.

Did I really want the adventure? Was all that imaginary, wild dreaming even real? I doubt it.

Reality had hit me hard. Big dreaming and living each day for new thrills could quickly and easily lead to a life cut short. So, what did I actually want for my life now that I stopped believing in make-believe?

I was 20 years old and going through a divorce. Each day I had been married had been a constant battle. I guess loving someone forever just wasn’t possible.

From here on out, I was done looking at any new relationship with “googly-eyes” and high hopes. The intoxication of true love was totally gone. I was ready to evaluate each and every guy that crossed my path like he was on a job interview. Because I mean, really, that’s kind of what a new relationship is. A super important job interview. Only this time, I didn’t feel like I was the one being interviewed.

Isn’t it funny that my new perspective on life, the new wall that I had built, attracted more men than ever? Maybe it’s because I never really ventured out into the world before this point or maybe it’s because men really saw my extreme dis-interest in them and found it incredibly appealing.

I dated a few different guys. We’d go to movies, they’d pay for my meals and yes, I was bored with all of them. “Thank you, next.” (OMG did I just quote Ariana Grande?

Then Tom happened. I can’t even begin to describe what happened in the split second that I met Tom. There was an instant attraction that I had never actually felt in my life. A spark. How cheesy right?

While I could tell that story for days, let’s get back to the point…if there even is one.

Love and the marriage

For the first year that Tom and I dated, I kept waiting for something to go wrong. That’s what I had adapted to in my life after all… Fun days, good times…HUGE FALL OUT. Something always goes wrong.

Nothing ever went wrong.

I would even try to leave. Yes. I would pack a suitcase and get ready to get the hell outta there. Why? Because there was some little voice in my head saying, “This won’t last. Nothing does. Get out now before you love him even more. Leave before it’s harder to leave. Just go.”

I never could. My head tried to get me to leave but my heart just weighed me down. I didn’t want to leave him.

Tom literally felt like my other half. If I called him on his BS, he listened and worked to better himself.

When I felt lazy, he was up doing laundry. So I got up too. If I ever felt that “wanderlust,” adventurer side take hold of me, he brought me back down to earth. But in the best way.

He showed me that every day just can’t be an adventure, but there is something beautiful to be found in day ordinary. There is stability. Consistency. Something I hadn’t really experienced before.

Still, even though I loved Tom, our marriage and the life we had built, I never really felt at in suburbia. Definitely wasn’t a city girl either. Out in the country? Well, that’s kind of far away.

I did a great job of convincing myself that this was where I belonged. I mean, I definitely looked the part. Perfect hair, nice clothes, plastered on smile. What a perfect image of a happy suburban housewife. Right?

Never mind the fact that “mom’s groups” were painfully boring to me or that neighborhood barbeques drained the life out of me.

Who cares that I spend my days pacing the shopping malls trying to find some item that gave me some sort of joy or gratification.

Then we moved to “the big house.” The ideal suburban house. Right at the end of a cul-de-sac. Stream in the backyard. Big trees, green grass, friendly neighbors. Jackpot. Right?

Talk about lonelier than ever.

Was I supposed to fill all these rooms somehow? From here forward was my life to be maintaining and cleaning these rooms? That’s my grand purpose? This is how I’m going to be spending all of my days until retirement?

There has to be something better.

Sometimes we have to live through what we don’t want in order to realize what we do want.

Now that we have downsized our house, and become completely debt free, I see more clearly than ever that even though I tried to get rid of her, that wanderlust girl never left me.

Without household chores or the obligation to money holding me down, I feel like I’ve gotten that glimpse of that roof top climbing, igloo building girl I used to be. She’s still here after all. And now, thanks to suburbia, she’s a little more grounded.

If I hadn’t “settled down” with all the white picket fences I never would have learned a good work ethic. I never would have seen the right ways to manage money. To this day, I still would be unsatisfied with the days in between adventures.

Now that I’ve had the chance to live a little and grow a lot, I realize I never really “belonged” here in the first place, but it was necessary for my growth.

Over the next few years, I plan to travel and to explore with my kids like my dad did with me. We’ll go on mini-adventures and big ones too. Because financially we can. They’ll wander this earth with both feet on the ground and a steady foundation to stand on.

It’s crazy how life can bring us in almost a full circle. Right back to where we started, but with a newer, better perspective.

Now I will raise my kids to reach for the stars, and search for UFOs. We’ll explore the unknown, dream about the seemingly impossible and then come back to our routine. We’ll find reward in a hard days work and peace in days we have nothing to do.

I guess it’s ok to be a little bit of both. A wanderlust dreamer hiding in suburbia. This whole time I thought it had to be one or the other, when really, somewhere in between is exactly what I need.

Socialize!
On the Gram
Just another reminder that I married the man for m

In case you need the reminder. You already have wh

In case you need the reminder. You already have wh