19 Rich People Who Choose to Live With Less 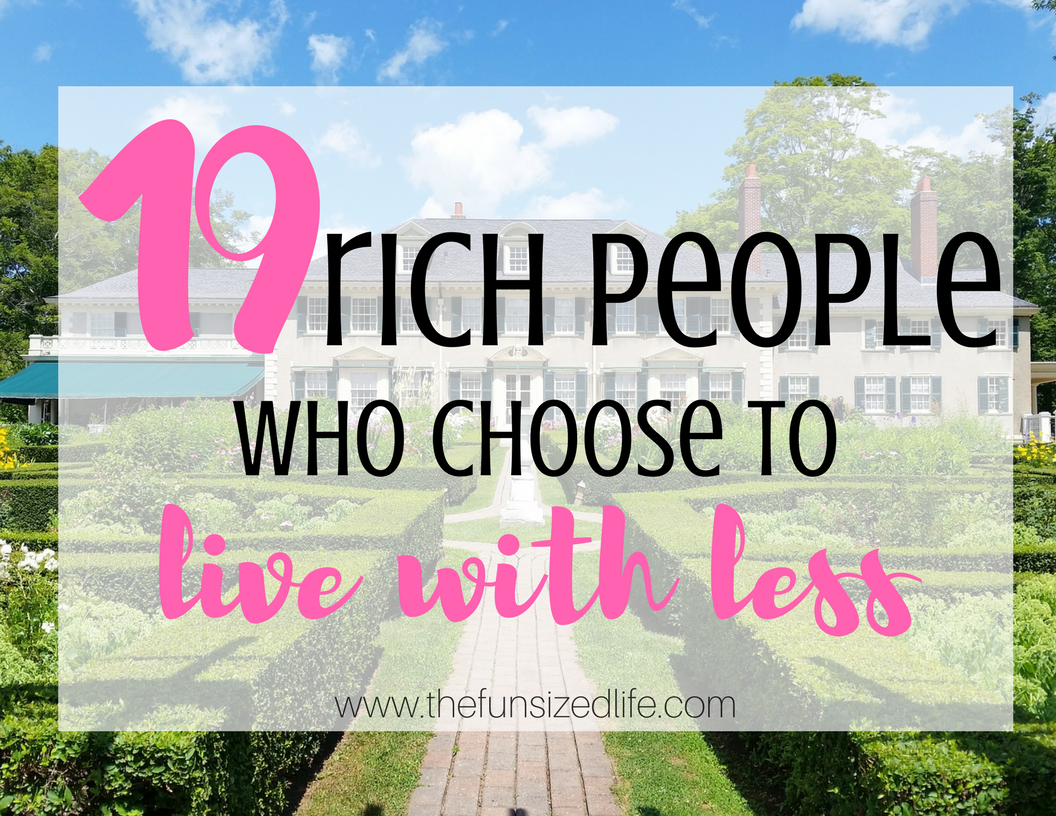 Our society these days doesn’t often see wealthy people living just like the rest of us; or does it? Do we walk amongst millionaires each day and have no idea because they decided to just be “regular” people? Probably. But the celebrity house tours only want to show you the $20 million dollar mansions. When walking the red carpet, most people are decked out in designer clothing and jewelry. However, there is a big chunk of wealthy people who choose to live with less. Big names in Hollywood and beyond have made the choice to live more minimalist lives and use their money for better things. So let’s talk about these lesser-known celebrities who are living simpler.

*This post contains affiliate links through which I may make a commission. All thoughts and opinions are my own.

Why minimalism is on the rise for the wealthy

It’s hard to tell whether the rise in minimalism in wealthy families is to be hip and trendy or if that is in fact what helps them build/maintain their wealth.

After all, we have all heard those stories of wealthy people who lost everything. Further proof that more money won’t help you if you already have ingrained bad spending habits.

Whatever the reason, I know our family has benefited immensely from incorporating a more minimalist lifestyle into our lives. We have been able to increase our savings, more than double our investments and create more time in our lives for the things that we value most, like family, travel, and experiences.

That’s why I created the Unstoppable Purpose program that guides you through the mindset, minimalism, and money shifts that can help you totally transform your life.

But, if you’re out there looking for some inspiration that a simple life is possible even if you are rollin’ in the dough, here is a list of celebrity minimalists to prove it.

Many of us have heard about the “dress” already. While strolling down the red carpet, Kristen Bell sported a $45 Target dress which is a pretty big deal in Hollywood.

With her frugal lifestyle, she also makes huge efforts toward helping the environment. From being fully vegan to biking as often as possible instead of taking her car.

In fact, I read a magazine article where Kristen showed up to the interview right after hopping off her bike. This bike instead of walk thing is really catching on.

Jay Leno has a famous collection of cars, but did you know he doesn’t actually spend any of his Tonight Show money?

When he started the show, he made the choice to only live off the money he earned from his stand-up appearances. This is wise if you are a 2 income household.

Using one income to pay the bills and any additional income to save and invest will help you live more comfortably when you are ready to be done working! See my investment plan to turn $50 into $150,000!

Yes, she has been a style icon for decades, but it’s pretty well known that Sarah Jessica Parker actually dresses her kids in hand-me-downs.

Just like the rest of us, she doesn’t see the point in shelling out huge wads of money for clothes that her kids will just grow out of.

She also doesn’t want them growing up with a sense of entitlement considering that she had to work to get to where she’s at today. You can do the same with the best online kids’ thrift store!

Leo has been around Hollywood since he was a kid and has earned himself huge amounts of money.

He’s also a huge advocate for the environment and frequently donates to charities that support it as well.

In fact, Leo is so devoted to supporting the environment and not over-spend, he only drives a Toyota Prius! If you are striving to be a bigger environmentalist, check out my post on how to reduce your carbon footprint.

I’m not going to lie, I didn’t know a whole ton about Warren Buffet except for the fact that he is a well known simple living billionaire.

Even after making his fortune, he continues to live in the same house he bought in 1950 for $31,500. He also lives his demanding life with no cell phone.

It’s even said that when Bill Gates comes to visit Warren, (ya know, NBD) Warren drives to the airport to pick him up.

When asked why he chose to keep life so simple, Warren has said he knows life would be worse if he had more to manage. –Smart guy.  See his 3 easy steps to success.

The founder of Facebook is doing pretty well financially although he claims that in his life he will give 99% of his earnings away.

Despite his wealth and popularity, he continues to keep a minimalist lifestyle. This includes his wardrobe.

In a job that already demands big decisions being made each day, the last thing he wants to worry about is what to wear. Check out my personal minimalist “uniform.”

The late founder of IKEA lived out his years flying economy, eating at IKEA dinners and either driving his only car or riding the bus.

The man behind movies like Ace Ventura and Bruce Almighty got seriously burnt out on his lifestyle following a major motorcycle accident that left him bedridden for months.

You can hear his story laid out more in his documentary, “I AM

After a major life evaluation, Tom walked away from his 17 million dollar mansion and moved into a trailer park that was within biking distance to work.

Even after fame, she continues to shop for herself and her children at regular retail shops just like the rest of us.

She has even been known to hit up those sales racks! While I was once an avid fan of sales, I also want you to be aware of all the ways stores trick you into spending more!

If you are the brains behind a huge company like Apple, you probably don’t have much time for extra clutter.

Perhaps that’s why I love Apple so much myself. Everything is always just so clean and simple.

Apparently, this is how Steve lived his life as well. In his bedroom, he had only a large photo of Einstein, a chair, lamp, and bed. He felt no need for added nonsense in his life. This is why there is an entire “Elimination Round” in the Rich Minimalist course…before we can show up with more creativity and passion, it’s so important to eliminate anything that is preventing us from making that happen.

I know you didn’t think I would go an entire post without mentioning these guys! Running their own businesses and being the stars of a major hit HGTV TV show has gained the Gaines’s huge celebrity over the last few years.

It’s almost hard to keep up with their wide range of successes. The latest ventures including 2 books (The Magnolia Story

and Capital Gaines,) a new restaurant, and a 5th baby on the way!

Maintaining success can be tricky which is why they set some serious guidelines right from the beginning.

Things like not allowing their children to be photographed and besides some minor clips, they do not appear on the show.

When beginning to film their show, Fixer Upper they also made a strict limit to stick with only renovating local houses in order to stay close to home for their children.

In order to slow down his life, he relocated to his home town in Canada to live on a farm and grow his own veggies. I guess you could say, he wanted to get back to his roots. Wink, wink.

Personally, I have failed repeatedly at gardening, but have huge success with my compost…so, that’s something. Right?

After his major success in the Matrix, he chose to give away 85% of his earnings and give them to the special effects and costume designers that were one the film.

This makes sense as they are truly what made the Matrix so unique and such a huge hit.

Halley Berry grew up with little, so she has a fear of losing all she’s gained. Because of this, she makes wiser choices like shopping for her own groceries and taking public transit.

Even though the entire world is watching her and her style, the dutchess has felt no pressure to keep her wardrobe constantly updated.

There has been plenty of talk about the fact that she wears outfits more than once.  Oh my gosh, can you believe it!?!

While there was some backlash, most of us mere mortals really loved seeing this far more normal side of her.

This pretty woman tries to stay down to earth by sticking to her basic jeans and t-shirt wardrobe.

She also grows her own veggies, knits her kid’s clothes, and continues to aim for a simpler kind of life.

Personally, I am terrible at gardening and knitting, BUT I ferment my own kombucha and yogurt at home. That’s something, right?

A woman by my own heart. Tori chose to sell her mansion and relocate her and her children to a more modest bungalow where they grow their own fruit and veggies.

She wrote the Harry Potter books quietly in her free time, why wouldn’t she continue her life after Harry Potter the same way? Quietly and modestly.

JK Rowling goes by her husband’s last name and works to stay away from the spotlight, despite her huge financial success from the Harry Potter series.

On top of avoiding the spotlight, JK makes generous donations to charities with her earnings. –If you have ever considered writing your own book, make sure you have all the answers on how to get started! Who knows, maybe you could be living famously incognito someday too!

Remember the huge deal people made when Lady Gaga had a teeny, tiny, belly while performing at the Super Bowl in 2017? Well, that’s because she’s a normal person who enjoys pizza, pasta and all things fabulous. And just like Jennifer Garner, she’s not afraid to shop the sales!

It’s true, these celebrities still probably live a whole lot different than most of us, but it’s still cool to know they make major efforts to keep life simple and minimal. Here are some of my best posts to help you do the same!

Pin this for later!

Socialize!
On the Gram
Our goal was to stay under $300 between new Christ

Would these impulse purchases have been expensive

When he shows love with acts of service but you fe

And that’s the true story on moving into our big

Would these impulse purchases have been expensive

When he shows love with acts of service but you fe

And that’s the true story on moving into our big