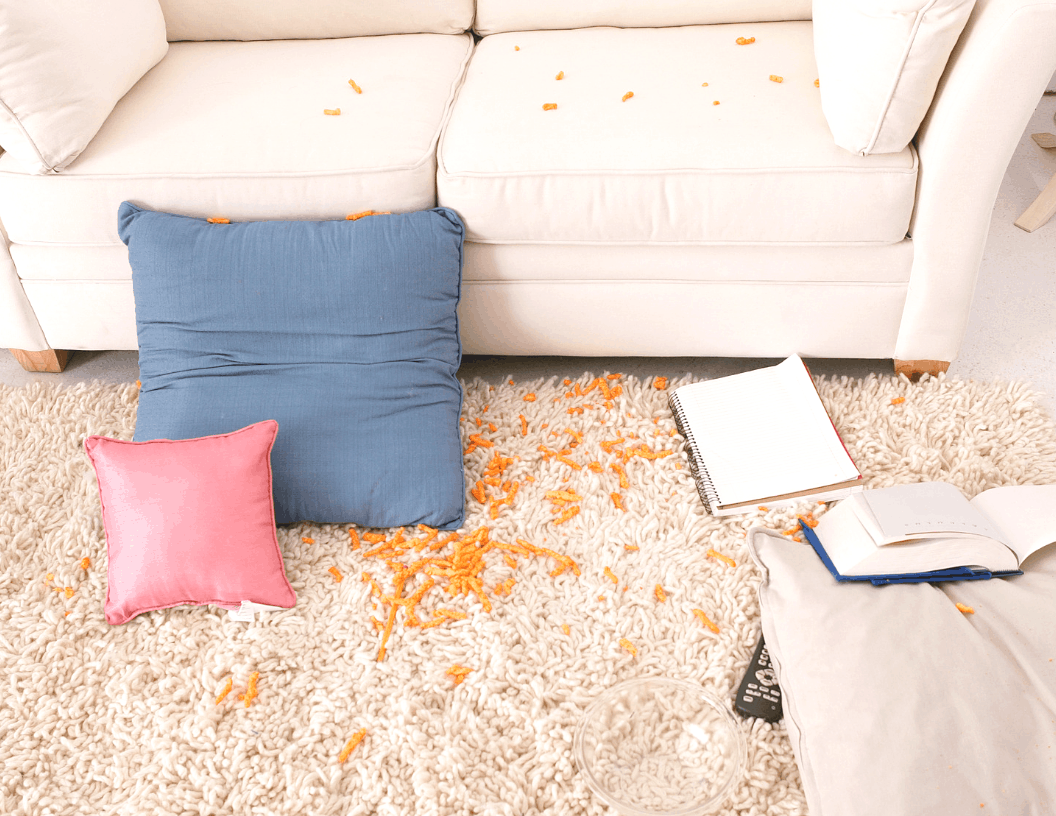 Yup. I did this to myself. At the time, it seemed like a genius idea. Tom made fun of me and I just ignored him, naturally. I made our family of 5 eat dinner on the floor for 6 months and just like most things in life, I learned some valuable lessons from it along the way. But first, let’s dive into why I decided to do this in the first place.

So this all started because we had recently finished Financial Peace University with Dave Ramsey and were still in full-on debt payoff mode.

After spending $1,000 on renewing our wedding vows in June, I was feeling more anxious than ever to throw as much money at our debt payoff as possible. As soon as the month of July hit, I started selling everything I could on Facebook Marketplace.We were working on selling things to pay off debt and we were going to need a new table anyway…so I figured we might as well just sell the thing.

Why we ditched the kitchen table

After a short deliberation, I decided one of the things we sold should be our kitchen table. Sure, we ate dinner together every night as a family for the first time in almost a decade. Before this, Tom was working 2nd shift, so he was never home for dinner. That means we needed a table with more chairs now that we had 5 people dining together instead of just 4.

We were working on selling things to pay off debt and we were going to need a new table anyway…so I figured we might as well just sell the thing.

I really wanted to get us out of debt (all in the name of family and financial freedom) and I figured having to eat dinner on the floor for a few months was a small sacrifice to make.

My rationalization when we first sold the table was that the money would help go toward debt payoff. If we paid off debt as planned, we would have an additional $1,000 per month (on average) and we could easily just put that toward a new table. We still had the island in our kitchen and some nights we chose to eat dinner around the TV (gross, I know.)

What actually happened was we had multiple things get in the way of our “perfect debt payoff plan,” we only put $75 toward debt and we sat our lazy butts in front of the TV most nights.

So let’s be clear when I say we started to eat dinner on the floor for 6 months, I don’t mean like cute, traditional, Japanese meals. I mean like on the floor…in the living room watching back to back Pixar movies.

Getting a new table before paying off debt

I quickly realized that the sacrifice we made for a merely $75 was just not worth it. Naturally, I turned to Facebook Marketplace to help me find the kitchen table of my dreams.

In years past, true to my shopaholic nature, I was happy to accept anything as long as it was on sale. When it came to our kitchen table I wanted something I loved, something that was quality and reasonably priced. On top of that, I was really hoping to find something that was made by a local craftsman.

We finally found a table that was the exact style I wanted, it was within our price range and it was made locally. Perfect.

$650 didn’t go toward debt that month, but our family was finally able to gather around a table together again.

What I learned from eating dinner on the floor

I don’t know why I have to keep learning these tough life lessons, but like with most things, I realized the sacrifice I made in the name of debt payoff wound up taking away time from something that matters more to me than financial freedom…my family.

I love sitting around a table, talking and laughing with my kids and hearing a little bit about their days.

More than anything, I realized a kitchen table is a symbol of togetherness. It’s where everyone gathers together and is not something I will ever take for granted again.

13 Proven Ways to Accelerate​ Debt Payoff and Save Thousands

Debt payoff. It was something I wanted so badly but just wasn’t sure…

Socialize!
On the Gram
Visual representation of trying to fight your own

It never occurred to me to give up the struggle ye

Just another reminder that I married the man for m

It never occurred to me to give up the struggle ye

Just another reminder that I married the man for m