When Downsizing Just Doesn’t Work: One Family’s Failed Attempt at the RV Lifestyle 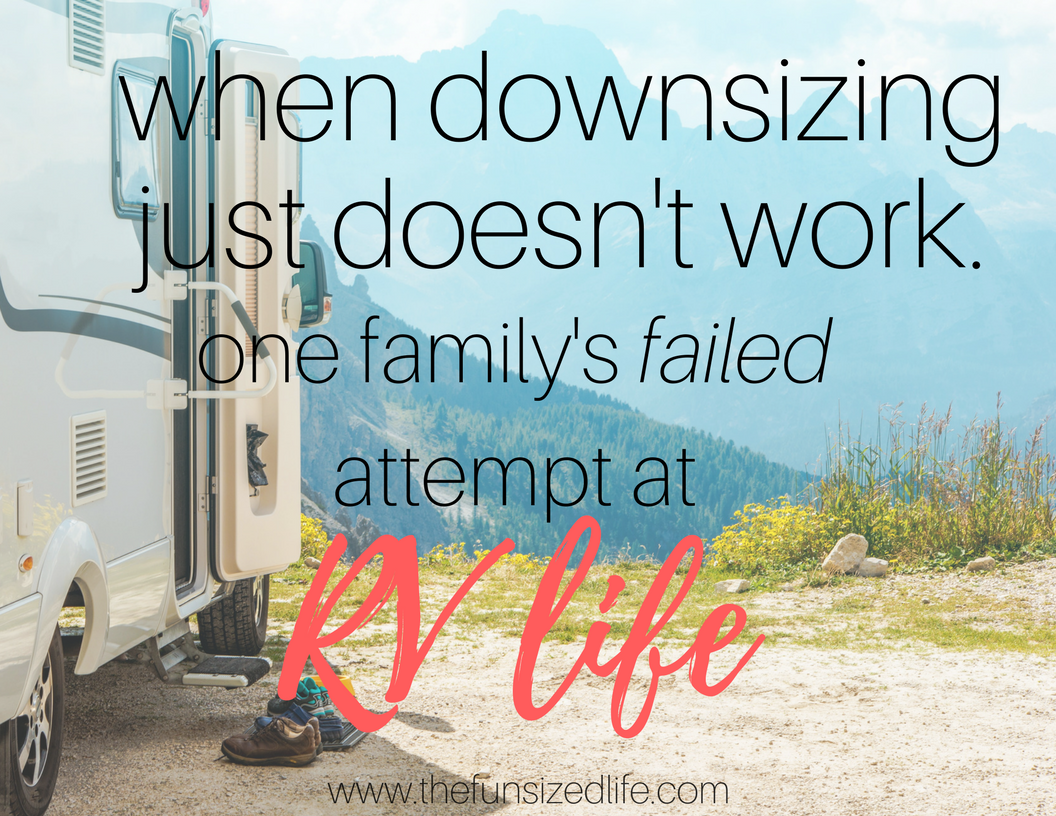 When Downsizing Just Doesn’t Work: One Family’s Failed Attempt at the RV Lifestyle

We’ve all seen them: those amazing articles about the families who ditched the traditional lifestyle in favor of experiences and life on the road. Whether it’s an RV or a tiny house, the message behind those articles is that downsizing can bring with it an almost ethereal bliss and, while there might be some “growing pains,” the family ends up stronger, happier, and more
fulfilled.

This isn’t one of those stories.

When I was in nursing school, I dreamed of being a traveling nurse. I was strategic in my job choices (pediatric cardiac ICU) because I knew those jobs were going to be higher paying and in bigger cities. “I don’t want to end up in some po-dunk little town,” I said.

Anyways, life happened and my dreams were put on hold. My chance to be a travel nurse finally happened when I was married, had a two-year- old, and was pregnant with our second. We sold just about everything we owned and moved from Iowa to Nevada. We were debt-free, had five figures in the bank, and were living large.

And then, I talked my husband into buying an RV. “It will be great!” I said. “We can find one with a washer/dryer, a separate bedroom for us, and it will give us better flexibility to be able to move anywhere! The boys will grow up having adventures but having a home…it’s the best of both worlds.”

We bought an older RV, but still had to take out a loan on it, which put us into debt. And here’s where it starts to get messy.

The RV was decently sized, as far as RVs go, and we were able to downsize a significant amount of our personal belongings, which was great for my husband and myself. But how do you store your son’s giant Tonka trucks (you obviously can’t get rid of them)? You shove them in a closet and hope they don’t fall out, that’s how.

If I were to recount to you all the things that went horribly wrong during our trek from Nevada to South Dakota, South Dakota to Missouri, Missouri to Minnesota, and Minnesota back to Missouri (5 days later), you probably wouldn’t believe me. But here’s a short synopsis

We couldn’t figure out how to turn the water pump on, so we had to go to Walmart to buy a couple gallons so we could make coffee.

When we parked at the RV park that night, they only had a 30amp spot open and our rig was a 50amp.

We quickly learned we couldn’t watch tv and run the washing machine without tripping the circuit. The toddler was not happy about the interruptions to Moana.

Our toilet clogged first thing in the morning, so since we were in another Walmart parking lot, I ran in with my newborn to buy some septic tank tabs. (Here’s a hint for you non-RV owners…that’s not what you’re supposed to buy for an RV! We didn’t know.)

We get to our destination, and I go outside to hook up everything. After I hook up the water hose, I hear my husband start to scream. The toilet was not only clogged, it was backing up – and flooding the bathroom! The only thing I knew to do was to find someone who knew what to do, so I ran around the park and found a wonderful gentleman from Texas who walked us through how to (manually) unclog a toilet (my husband is my hero!), and he gave us some RV-appropriate treatment fluid.

Called the fire department because we smelled gas. Turns out, one of the knobs on the stove was faulty. Had to call a repair man to shut off propane to the stove (our rig was too old for him to have a replacement part on hand, it needed to be ordered). He also helped me learn some basics of electrical wiring and mechanics as we tried to figure out why the hot water heater wasn’t working.

During our investigation, we found out that not only were the house batteries bone dry (they each held 3 water-bottles worth of water), but that the heat generated from the dry batteries burned through the metal battery isolator. –Ya’ll, there were literal ashes on this isolator.

After a week in St. Louis visiting family, we hitched up and headed to Minnesota. The ride itself wasn’t bad, and fairly uneventful. The problem came when we drove over to the mobile home park where the overseer had said we would have a spot with hookups.

First, the directions Google gave me led us straight into the middle of the State Park, and then the service cut out. It was getting dark, and my poor husband had to turn our 40’ rig around on a wet sandbank near some lake.

Second, when we arrived, not only was there no actual lot to park on, but the man in charge said they had no RV hookups. I called the original man who said there would be hookups available, and left a message. We tried to park at the hospital where I would be working, but none of them worked. We finally landed at a spot within the State Park that had electricity
hookups only, the water had already been shut off for the winter and you had to drive to the sewage center to dump.

After a 3-day ordeal that involved several discussions with the original man who said hookups were available, we had to break contract and decided to head back to St. Louis. We could not make our children continue to live without running water. We hadn’t showered, we were doing laundry in the sink…and the man told me, “Since you will only be here 3 months, it’s not worth my time or money to make this right for you.”

We got out of that town as fast as humanly possible. We drove for an hour and landed in a Walmart parking lot for the night and had a serious talk. My husband was ready to sell the RV and start our life completely over, and I wanted to push through and keep it. We talked for seven hours (for real), and eventually came to the conclusion that trying to find a new assignment while hastily selling the RV and finding another way to haul our belongings was too much to try to fit into a possible few days. We decided to just keep it and work at it.

The next morning, our RV wouldn’t start. As it turned out, the new isolator I had installed, while it was installed correctly, was just high-powered enough to burn out our battery. After we replaced the battery (another unexpected $200 expense), we had another talk, this one lasted almost the entirety of our 12 hour drive from Minnesota back to St. Louis. Finally, I agreed with
my husband that the best thing to do would be to just cut our losses, sell the RV, and find a permanent nursing position elsewhere.

The following week, we sold the RV, found a gorgeous townhouse (we are the first to live in it after the remodel), and I landed a work-from- home job.

We paid off all our debt and are back to saving as much as possible.

I have a few key take-aways from this horrible experience that I would like to share with any of you who might be considering a dramatic downsize in your future:

1. If you are part of a couple, you both have to be committed to this 100%. I dragged my
husband into this (he puts up with entirely too many of my shenanigans, truly a saint),
and he had a lot of reservations about the RV life that I ignored rather than respected.
As it turns out, all of his reservations ended up being proven accurate.

2. If you do choose to buy an RV, make the dealer take you on a walk through everything. I
mean everything. Ask them where the water pump on switch is. Don’t just know where
your battery bay is, check all the batteries for adequate water supply. Check the
condition of your isolator. Find out that your hot water heater will only turn on when
the gas detector is on (learned that one to the tune of $250). Know where all of your
fuse boxes are, because there are multiple, and chances are they are also unmarked.
I’ve heard some dealers will let you spend the night in the one you are considering
purchasing, so you can find out what you don’t know. It never hurts to ask.

3. You won’t save that much money. If you’re selling a home with profit enough to
purchase an RV outright, cool, but don’t go from one loan to another. Most RV lot will
charge you for the pad and electricity, and if you have a payment on your rig as well,
you’re not really saving much per month. Do set aside money for repairs so they don’t
surprise you.

Downsizing is an honorable goal, and many find it attainable. But it doesn’t happen instantly, and I think that’s where we took a wrong turn. The RV lifestyle is also not generally well-suited to small children, as there aren’t many places to store or easily access their toys without the space seeming cramped or cluttered. We have an active toddler who loves to run laps around
whatever room he is currently inhabiting, and the RV just wasn’t big enough for that. In the end, the RV lifestyle works beautifully for some, but definitely not for us. The pursuit of minimalism, while it can be someone stressful, should not induce ongoing stress and anxiety.

The real adventure is pursuing dreams created together, where both have a say and are equally committed. 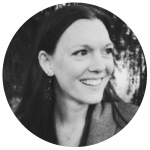 Amanda Kintz is a wife, mom, nurse, coffee aficionado, and blogger at CrunchyHippieLife.com,
where she blogs about the importance of a holistic, sustainable lifestyle and how to do that on
a tight budget. Check out the blog for a free copy of her ebook, Dirt Cheap Nutrition, where she
lays out exactly how she and her husband ate a healthy diet for $25 per week!

Don’t Forget to PIN This!

12 Signs that Downsizing is Right for You

Almost 4 years ago we made the choice to downsize our home. Our family of…

6 Reasons You Should Downsize Your Home

When my husband and I talked about our dream home, we envisioned many things, like…

Find what you need…
About Me!

If you are tired of feeling like your dream is stuck in your head with no road map to make it happen, you are in the right place.

I stopped keeping up with The Jonses and started living life on my terms. Now, I want to help you do the same!