The Thin Line Between Cheapskate and Spender: the mindset that connects them. 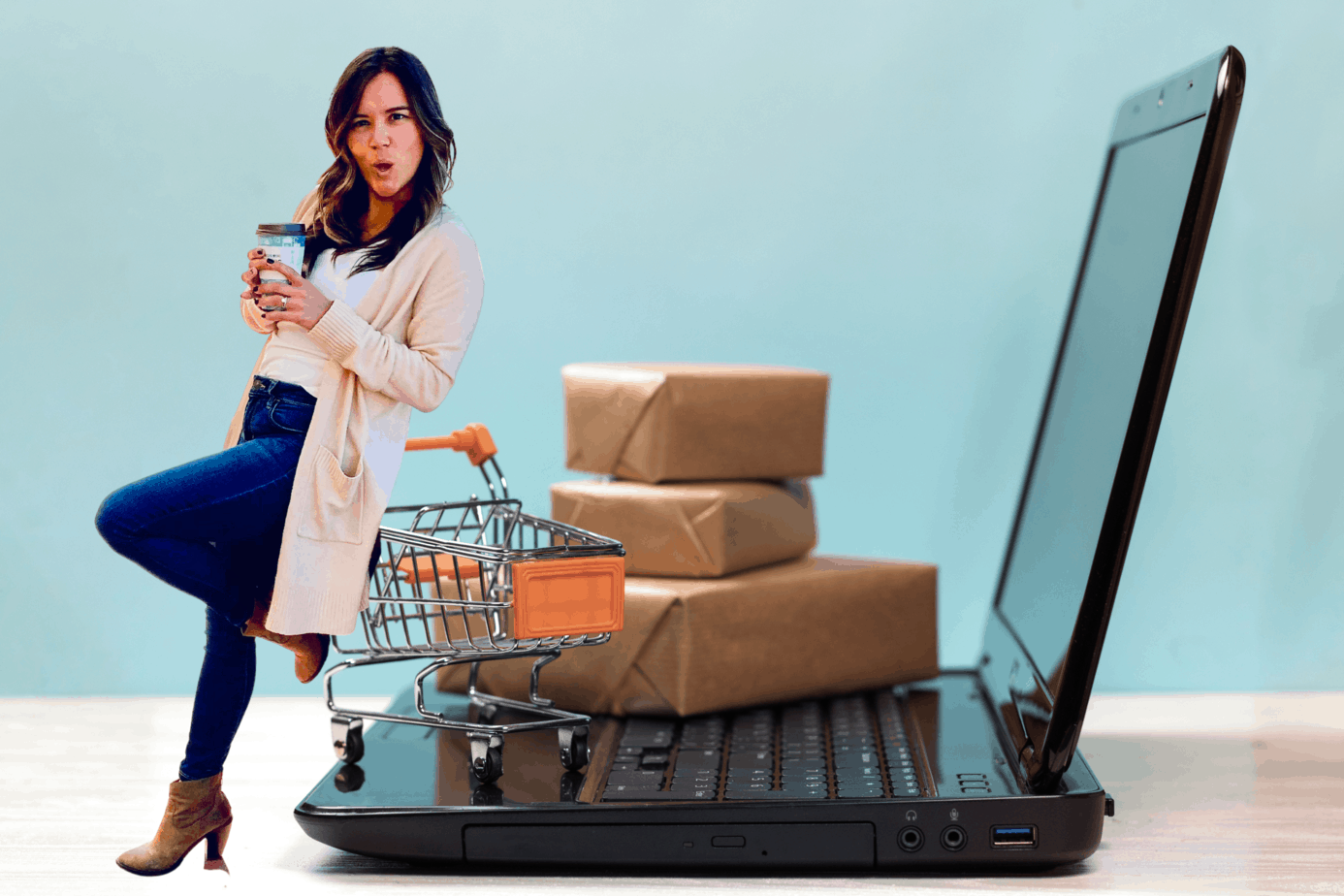 Way back in the day (like 6 years ago) when I decided to stop being a compulsive spender who deeply lived with a YOLO mentality to a frugal, financially wise budgeter I wish someone would have told me that these two things are basically next-door neighbors. On my journey to better understand money, I went to the extreme opposite of the person I had previously been. The funny thing is that now I realize the opposite was still pretty much the same. Do you know how they say there is a fine line between love and hate? Well, as it turns out the same is true for being a compulsive shopper and a total cheapskate. I’ll prove it.

My brain on spending

For as long as I can remember I have been an impulse shopper, instant spender, can’t keep cash in my pocket if my life depended on it.

The second payday hit our bank account you best believe I was heading to the mall or Target depending on which stage of my life I was in.

In high school this meant giving my mom money for my car insurance and then blowing the rest of my paycheck at the Mall of America with my girlfriends. Abercrombie and Olive Garden, amiright?

As a stay-at-home mom this meant pre-buying clothes for my kids for the next year because they were on clearance (a wise idea in some respects), and cramming whatever shiny thing caught my eye anywhere along the aisles. I’m pretty certain during this time in my life that my eyes became immune to any color that wasn’t the bright yellow or red of a clearance sticker.

No matter what stage in my life, there was one thing that always stuck…the immense guilt and shame I felt after a spending spree.

“Now we have nothing.”

I would tell myself it was just a one time thing. I just “needed” those few things, now that I had gotten it all out of my system, I could do better next time.

There was always something new I had to have to be happy or complete or prepared.

Having lived through a childhood where addiction seemed to be everywhere…alcohol, gambling, cigarettes…I was so proud to claim that I was not addicted to anything. That the addiction gene somehow skipped me and yet, here I was relying on the next shopping high to get my fix. All while lying to my husband, going totally broke every month, and of course, never admitting there was a problem until I hit rock bottom.

If this sounds all too familiar, please don’t think you’re alone. So many people struggle with the shopping impulse, that’s why I created The Shopaholic Solution as a resource to help empower others who struggle with impulse spending.

Like any true addict, the only way there is hope for treatment is when you hit an all time low and are finally ready to admit to yourself that you have a problem.

For me, the big house helped show me this clear as day. The second our mortgage shot up by over $800 per month *Yes, this is gross, I know. Remember, we had no clue what we were doing* I began to really see how little wiggle room there was for me to mess up month after month.

Thankfully, I was making way more money at my photography business, however, I was also just spending every single dime I made on the fun stuff. I would throw the occasional $1,000 at my student loans or pay off a credit card if the mood hit right but there was no rhyme or reason to our financial plan (and definitely not a dime in our savings account).

I would go into a panic at the idea of having to spend more money just to fill the house with furniture. I wanted my home to feel homey…and it didn’t. It felt empty. Like an asylum that I would need to fill with cozy furniture and book shelves if I ever wanted to feel at home in it. And that was going to cost a lot of money.

Thankfully the realization hit me that my marriage was falling apart, all our time was consumed by the house and I didn’t want to spend my life living this way. We decided to sell the house and then guess what…

I always think of this moment from Friends when I think of what happened next.

For the sake of keeping this short, sweet and to the point, here is a list of events:

It was time for a change.

The road to cheapskate

After experiencing the soul crushing broke-ness of hitting rock bottom that guilt, regret, and shame of years and years of wasting money and spending on pointless things can really do a number to your psyche.

I was more determined than ever to get ahead with money. To understand money. To learn whatever the hell it was I didn’t know about money.

That the hardest thing, isn’t it? When we want to know what we don’t know.

I didn’t know where else to start except for Financial Peace University, by Dave Ramsey. For the first time in my life, I had someone laying out a financial game plan for our how to win with money. I had phrases ingrained in my brain like,

I was so thankful to have a game plan for my money and some idea of how to start getting ahead in life that I followed step by step every single thing that Dave told me to do.

He also let us know (actually, it was probably more his daughter, Rachel) that a budget is permission to spend. She made it sound like it was actually a good thing being a “spender” like she was. I loved that, but there was no other mention of fun spending in Financial Peace. No one told me that it was on to spend a little bit on myself here and there.

I went cold turkey on joy and went all-in with paying off my debt…because I needed to be intense and I didn’t want to be a slave anymore. (Spoiler: read about why Dave was too intense for me.)

I was determined to become debt free but I was also about to fall into a deep, dark hole that left me feeling suffocated, depressed, and more obsessed with money than I had ever been before.

Ok, so I got really into saving money with couponing and shopping apps, and we had managed to spend only $500 per month or less on our family of 5 when it came to groceries. We found only free things to do and put every single extra dime we had toward debt payoff.

I imagine that during this time of my life I looked like a cartoon person who had been wandering through the desert, was severely dehydrated and halusinating. That’s what it felt on the inside at least. I felt deprived, btu I deserved to. I had let myself become a slave, after all. All of my mistakes and my ignorance and culminated to this point in my life, therefore I deserved to suffer the consquences.

Man…can we just pause for a moment and think about how often we all do this to ourselves? Beat ourselves up long after the deed has been done as if it will somehow change the past or right the wrong? We really need to knock that shit off.

Finally, after depriving ourselves for months, I finally decided to include $100 of fun money for each of us (hubby and I) into our budget and oh, man, I can’t even begin to tell you how easy it felt to breathe again!

The overlap between overspending and spending nothing

Now that I feel like I am finally living life in a healthy place and sharing/celebrating my spending on Instagram I can finally see so clearly how:

You see, when I was overspending like my life depended on it, I was doing it with the belief that life could end at any moment and I wanted to be sure to take advantage of every single thing that I could.

I lived with the fear that if I didn’t buy something I would be missing out. If I didn’t jump on a new opportunity, I was wasting my life. If I wasn’t going out to eat on the weekend then I had wasted a weekend of my life.

When I was penny-pinching and living the Extreme Cheapskate lifestyle I was living in fear of never having what I needed. I was afraid of being a failure. Afraid of getting to retirement and being broke.

The link between these two things: fear of not having enough. Fear. Fear was linking me to overspending and over-saving. It’s insane how our mindset can play such a huge role in our success with money (amongst other things) and when that falls into place, everything else does too! Check out my Money Free Mind training if you need help with money mindset.

I don’t know about you, but I sure as hell don’t want to live my entire life living in fear.

I will not pretend for a single second that learning how to balance spending in a healthy way was super easy for me. I am baffled at the idea that anyone has been able to do this their entire lives with zero problems.

Yes, I want to take advantage of new experiences…but I also want to be picky about what experiences get my attention and my money.

Yes, I want to plan for retirement, but I also want to travel and see the world before I’m 65.

The best way I have found to live in an almost perfectly balanced state between cheapskate and spender is by:

If you think you fall into one of these two categories, here are my best resources to help you.

Socialize!
On the Gram
For years I felt like just lounging around was a t