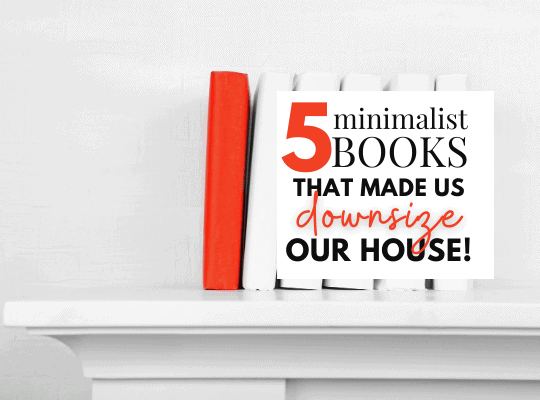 Back in 2014 I got into reading in a big way. Before that, I had really only been interested in the occasional romance thriller. I think having to read books I absolutely hated in high school kind of killed the idea of reading for me for a decade. Anyway, I started finding books that were talking about downsizing, living a more simple life, and all of the freedom in it. I didn’t realize it at the time, but these books were laying the groundwork for what would be one of the biggest changes our family would make that would save our finances and our marriage. Here are the books that started it all…

You Can Buy Happiness (and It’s Cheap!)

If I remember correctly, I stumbled upon this book by accident after a friend recommended I read, The Happiness Project which oddly enough, I still haven’t read.

You Can Buy Happiness (and it’s Cheap) is a book about a woman who got caught up in always wanting bigger and better things.

She needed the best engagement ring in order to impress friends and insisted on having a beautifully decorated 2 bedroom apartment even though it was only her and her fiance (at the time).

Slowly she started closing off space to her apartment. Kind of like I talk about in my post how to downsize without moving. In doing this she tested the waters on how much space she could actually comfortably live in.

They did this in order to move into a tiny house (which is still a dream of mine).

I loved this story and related to it in a big way, especially the engagement ring part. Having someone else call out their own materialism made me become more aware of mine and feel less shame around it knowing that it wasn’t only me.

In fact, during our minimalist journey I have found that our stuff can actually hold us back from living a bigger purpose.

I actually give this book, Wishes Fulfilled, credit for why I started reading again. It sparked an interest in me and I couldn’t stop.

Now, this book isn’t directly correlated with minimalism, downsizing, or simple living necessarily. It is however a spiritual book about manifesting the life of your dreams and one thing it makes clear that will always hold you back is identifying your true self with stuff or titles.

However, it became more and more obvious that by living this way I was choosing to live in a vicious cycle of never actually aligning with my true self.

A Simple Act of Gratitude

This book popped out at me on the Barnes and Noble clearance rack one day and I’m so grateful it did!

A Simple Act of Gratitude is about a man whose life felt like it was falling apart. His romantic relationship as well as his business were hanging on by a thread. Then he decided to start writing Thank You cards to clients (even the ones who weren’t paying him) and to his girlfriend.

I have been pretty straight forward about how our marriage was struggling when we lived in our “big house.” Because times were feeling extra difficult and money worries always plagued us, I wanted to give this whole Thank You card thing a try.

I took a fun family portrait one day (having an in-home photography studio made this pretty easy) and instead of turning it into a Christmas card, I turned them into blank cards that I could write Thank You notes on.

I wrote a Thank You card to 100 people that year.

Cultivating a life filled with gratitude reminds us naturally of all of the amazing things in our life which in turn slows down our desire for more. Grab my 75 free journal prompts to help practice gratitude.

The Power of Half

Again, never underestimate the power of a book on clearance! I snagged this one for $2 at my local Half Price Books and it could very well be the one that lit that spark inside me completly on fire.

The Power of Half is about a family who lived in a beautiful, well-known house that was over 5,000 square feet and even had an elevator!

One night at the dinner table their teenage daughter began drilling her parents about not doing enough (financially) for those in need. The parents defended themselves by saying that they write checks to charity all the time.

The parents then began to realize that writing checks was a really passive way to actually make an impact on the world. Eventually they came to the decision to sell their house and downsize into something around 3,000 square feet.

They would live in something about half the size of their previous home and they would take half the profits from the sale of their larger home in order to leave a lasting impact on the world. (Helping to provide water in areas without a healthy water supply.)

The More of Less

To be honest, I don’t remember much of this book, but I do know it is one that I read during this time.

It is written by Joshua Becker, the blogger behind Becoming Minimalist. In the book he talks about his family’s decision to downsize and live a more minimalist lifestyle.

This is a lifestyle they still live. I love how he talks about minimalism in a way of simplifying your life but also allowing yourself to enjoy whatever it is that you specifically choose to enjoy.

That might mean that you could still have a big house and live like a minimalist (I know Kim and Kanye do). 19 Wealthy People Who Choose to Live with Less

During this time in my life I also go big into documentaries so I wanted to share 2 with you that I found to be inspirational in cultivating a more minimalist lifestyle.

Minimalism is a documentary by The Minimalists. It is about their journey from big, 6-figure corporate jobs to living basically out of a backpack.

It was really eye opening as far as seeing two people who had originally had “The American Dream” and realized it wasn’t quite what they thought it would be.

I loved this documentary by Tom Shadyac (director of Ace Ventura and Bruce Almighty).

I Am talks about Tom’s big life revelations after he had suffered a head injury. He starts seeking life’s bigger meaning and why things go wrong.

This documentary was so interesting in the realization that we are all connected, and again the reminder that stuff and money doesn’t always bring happiness.

In fact, by the end of the documentary you get to see how much Tom downsized his own life. To see such a well-known director living so simply is shocking and inspiring.

How to start letting go now

If you know you are ready to cultivate a more simplified way of living, I have a few recommendations on how you can get started.

Remember, minimalism isn’t about anyone else but you.

If you want more next steps, check out my training, Undefined. It is laid out to help you understand your true self better and gives you practical tools to continue listening to that inner guidance rather than chasing external joys.

Minimalist Kitchen Essentials Are A Scam. Here’s what you really need.

There is truly something magical about a minimalist aesthetic bedroom. I know, I know, all…