How BlueHost Saved My Blog…Repeatedly 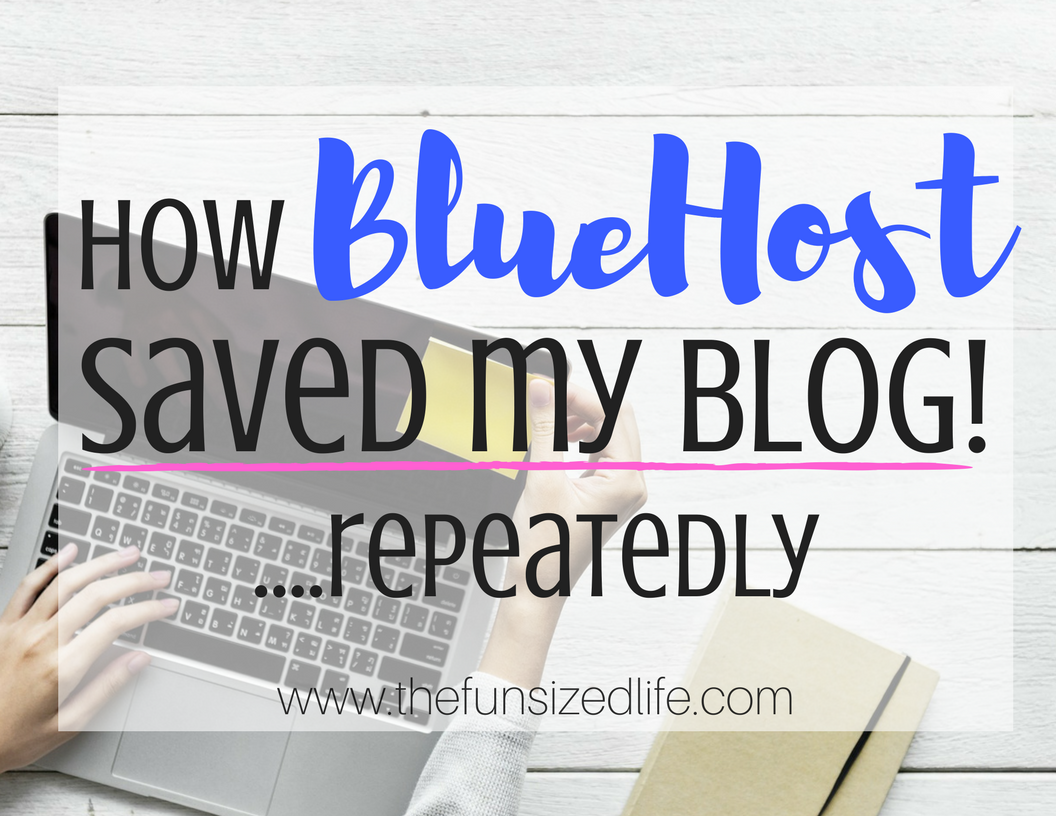 When I first started blogging, I so badly wanted to do everything right.  I’m not going to lie to you, I made many mistakes along the way. Now that I’ve just finished up one whole year of blogging, there is one thing I am so glad I did and that is starting my self hosted blog with BlueHost. Literally the very first step I took when starting my blog was the right step to take and I am so thankful for that. No, this isn’t another post all about how to set up your blog. This is a post all about my honest review and how BlueHost saved my blog…repeatedly.

*This post contains affiliate links through which I may make a commission. All thoughts and opinions are my own.

When I started blogging, I didn’t know much. I had to research and learn like crazy. So without any actual knowledge of what a self-hosted site even meant, why did I choose BlueHost?

I decided to start my blog with BlueHost because I understood that self-hosting was important if I wanted my blog to grow. No, I didn’t fully understand all the ins and outs. I won’t pretend as I did. But I knew that if I wanted to be taken seriously as a blogger and if I wanted more ways to potentially make money, that self-hosted was the way to go.

There are other hosting companies out there, but I noticed a trend with a lot of top bloggers, and that was that they all seemed to be recommending BlueHost. After really getting to know these bloggers and trust their content and opinions, I decided they were probably on to something. If BlueHost was their top choice, maybe I wanted it to be mine as well.

Starting a blog with BlueHost

Starting up a blog is stressful, especially if you are putting money into it right away. It’s hard putting a lot of money into something that might totally flop. When I saw that BlueHost has hosting for only $3.95 a month, I was officially sold! I had set aside a certain amount of money to help get my blog off the ground and with BlueHost, I would come in under budget!

When the day got closer, and I knew I was actually going to be starting a blog, I got crazy nervous. There were so many technical aspects that I wasn’t sure I would ever understand them all. I knew I could either over-think it or just make the leap into my dream job. So I made the leap. Thankfully, setting up and getting started was so easy with BlueHost. Every step was broken down so that it never felt overwhelming at all. If you want a little more guidance, you can check out my How to Start a Blog guide so that there are no surprises.

Once I got my site name selected and got registered, I was quickly and easily guided into WordPress to start setting up my blog! I couldn’t believe how stress-free the whole experience was. After all, setting up my site and making it pretty was what I was the most excited for! There was very little stress when it came to getting started which meant I could jump right into the fun stuff!

I officially had a blog!

In the first few months of blogging, there were no major issues or cause for concern. Which is good because I was still figuring out just how to run a blog! From March to September my blog continued to grow…but very slowly. Since I am a relentless optimist, I would celebrate no matter what the page views on my blog were. If I got 20 page views in a day, I counted that as a success. Little did I know I was just months away from over 100K in page views!

As I entered into the month of September I took a break from blogging to do a little soul searching. Running a food and fitness blog just felt like too much effort. Now that I look back, it’s easy to see that I wasn’t being genuine with my blog posts and that my whole heart really wasn’t in it. That’s why I decided to just start blogging my way. I would blog more about my life but still in a way that was beneficial to other people. It’s hard for me to write content that I think will serve no purpose in bettering someone else’s life. Wouldn’t you know it, in the last week and a half of September I got more page views than I had gotten in any of the previous 6 months!

I started to see that people were frequently viewing the few blog posts I had written about finances and minimalism and I decided maybe that was the direction I should take the whole blog. However, the name Heart Soul and Whole Food just didn’t really seem to fit anymore!

The idea quickly began rolling around in my head of changing the blog entirely. I had no idea how to even begin. I began researching and reading stories from other bloggers on how they rebranded themselves. Among all those that had rebranded, there was one common theme, “It was very difficult and super stressful, but I’m so thankful I did it!”

So thankful they did it….

That was all the assurance I needed. Even though rebranding my blog was something I definitely wanted, I was worried I might lose all my content and then I would lose all the people who had been viewing my content!

From what I had researched I knew I needed the following to rebrand:

It all felt overwhelming. Just looking at that list right now makes my head hurt. Most of that stuff I didn’t even know how to begin starting to do. Nonetheless, I jumped in headfirst. I came up with a domain name and then I reached out to BlueHost.

Because of my major fear of losing all my content, I made sure to contact BlueHost right away to make sure I didn’t make any irreversible mistakes. I told them that I wanted to change my name. Here was the to-do list they gave me (in comparison to the one I already had in my head.)

Okay, I thought, I will change my domain name and then figure out all the rest. Once I had my new domain all in place thefunsizedlife.com (WHOOP WHOOP) I contacted BlueHost to let them know. To my surprise, they took care of everything for me!

Within 24 hours my new site was up and running. The layout was exactly the same, so I didn’t have to make any changes (except change the name in the heading of course.) When I typed in my old domain heartsoulandwholefood.com I was instantly redirected to thefunsizedlife.com!

This didn’t go nearly as stressfully as everyone had made it seem! Maybe their hosts didn’t help them as much? Maybe they didn’t ask? I can’t say for sure. All I know is my rebranding experience with BlueHost was a total breeze! They literally helped make my dreams come true.

I did still have to change my Pinterest pin images to say my new site name, but all the old pins already lead directly to the new site!

Since my big rebranding experience had gone so smoothly, I have made sure to contact BlueHost whenever a problem has presented itself. Which is frequently with me. In fact, most of the problems that I have had had nothing to do with BlueHost or their hosting at all! My problems were from my layout, Facebook, and mostly my own mistakes. No matter what the problem, or who was at fault, BlueHost guided me along until the matter was resolved.

When I had a problem that had nothing to do with them, they would give me tutorials and guides on exactly what I did need to do to fix the issues I was having with the blog.

Is BlueHost Worth the Investment?

I won’t lie, during my rebranding process, several bloggers encouraged me to switch from BlueHost. I was told that this was my best chance. I’m so thankful I didn’t listen and continued on without switching my host! BlueHost has done all the heavy lifting for me as a blogger so I can continue focusing on my content and my audience. I’m so thankful that I didn’t hesitate to sign up with BlueHost.

If you haven’t started your blog or website yet, BlueHost is your best bet for getting started quickly and easily. Even if you have already signed up with a host, if you have experienced any problems, I would encourage you to give BlueHost a try. If they could easily transform my entire blog for me, I know they could do the same for you!

Pin this for later!

When I first started blogging, before I even wrote my first post, I read everything…